Czech Christmas might be very different to the Christmas you celebrate back home. Did you know that we open the presents already on the 24th and not on the 25th? And actually, do you know who brings presents to Czech children? Read more and find out!

The 24th of December

For most Czechs the day they look forward to the most is the 24 December. The way we spend this day differs in each family. We would usually visit other family members or friends or go to the cemetery to visit the ones who can´t be with us anymore. Some people decorate the Christmas tree on the 24th, some had already decorated it earlier. But the evening looks very similar in most families. The typical Christmas dish is fried carp with potato salad, however, some people prefer to eat salmon or schnitzel instead. During the dinner, Baby Jesus (Ježíšek in Czech) brings us presents and leaves them under the Christmas tree. When we finish eating, he (meaning of course a parent pretending to have gone to the bathroom) rings the bell signalling that everyone can gather around the Christmas tree and open the presents. Yes, that´s the answer to the question from the beginning of this article – it’s Baby Jesus who brings the presents in the Czech Republic. We spend the rest of the evening opening our presents, eating Christmas candy and watching fairytales on TV.

So that´s how a typical Christmas Eve looks like in the Czech Republic and now, let´s have a look at some of the Czech Christmas traditions and customs:

Waiting for the Golden Pig

A legend says that if you fast all day on the 24th you will see a golden pig in the evening. Most people love to eat all the food that we have during Christmas too much, so we don´t usually respect this tradition these days, but a lot of us eat meatless dishes for lunch. It differs in each family, but a lot of people eat hulled grain with mushrooms, pea soup, apple strudel or typical sweet Christmas bread called Vánočka.

‘No, no, I don’t have to - I already see it…’ - an emblematic quote from a Kofola (traditional Czech lemonade) Christmas advertisement: https://www.youtube.com/watch?v=Fz1WjfGnASw

Another Czech Christmas tradition is cutting an apple. If you cut an apple in half and the seeds look like a star, it is said to bring you health and luck for the upcoming year. But if you see a cross it means bad luck or even death.

Some families melt a piece of lead on Christmas Eve and pour it into water. The shape that the lead creates predicts what will happen next year for the one who poured it into the water. This tradition sometimes requires a good amount of imagination!

As you may have already noticed, Czechs love to predict their future at Christmas. Empty walnut nutshells are used as small boats for a candle to float on water. Each family member places their candle in a nutshell and the nutshell in a bowl of water or a water basin. If the little boat sinks it means death, if it stays at one place no changes are expected next year. If the boat makes a circle with others, it means friendship and tolerance. The little boat can also hit another boat, appear in the middle of other boats or, on the contrary, appear on the other side of the water basin than all the other boats. It´s not difficult to guess what that will mean. 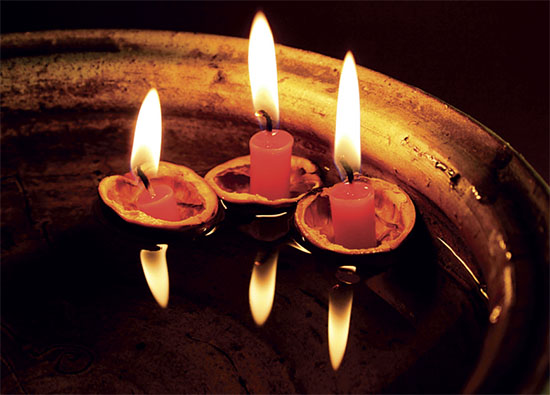 When family and friends join on 24 December over the dinner of carp, it is customary not to lift your plate off the table until after you’ve finished eating. The reason for this is that everyone should find one carp scale under their plate, which is to be kept in one’s wallet for the whole year to guarantee wealth. Similarly, eating lentils (most often in the form of a soup) on January 1 of the new year symbolises an abundance of little coin that should last until renewed again the next year.

We hope that if you try any of these Czech customs, the prediction will be good and the magic will work!