Exchange in the Times of Corona: Interview 2, part 1

This and next week an interview with Mathilde, an English major from Denmark and my wonderful flatmate from Stirling, will bring us on another journey. We have chatted about how she decided to go on Erasmus and how uncannily similar our backstory to having chosen exchange and the specific location was. We’ve discussed being the last pre-Brexit Erasmus batch, staying for the whole semester despite the situation (mainly that back on the continent), but also finding just how powerful the experiences close to home can be.

Do you remember when you decided to go on exchange?
When I found out at my university. I hadn’t known you could go on exchange until the first week of uni, when people told me all about it. And at that point I already decided I wanted to go to Scotland because I had just visited it a year prior to that.

We have such a similar story!
I hadn’t seen Stirling on my first trip, though, but on the second trip we lived at an AirBNB owned by a lady who used to be a professor at Stirling, and she persuaded me to go see the town. I just loved it! And then, a year later, put it in as my first choice.

Absolutely! I think we both knew we wanted to go to Scotland, and then we were like ‘Oh, there’s this place called Stirling… and it’s kind of cute!’ (Both laugh)

Actually, though, Scotland is the number one destination at my university! Our application process is a little different from yours – there is an offer for the whole University of Copenhagen and then for each faculty as well as for each department. And you can choose any of these!

Also, just in general, I’m so happy that we got to go before Brexit, while it was still the good old relatively simple Erasmus deals.
That’s what I was thinking as well – now or never! Even if there is an option in the future, it will be so much more complicated.

When did you submit your application? I’m asking because I put mine in at the end of February, when corona was already spreading all sorts of doubts and fears around…
No, I think it must have been earlier for me – late 2019. So ‘rona’ wasn’t a thing at all yet!

Okay, so you probably didn’t have that kind of doubts – but still, did you have any at all when signing up?
No, not really… Just the organisation – you know, having to let your rented flat go for half a year and so on. But then when corona hit, I didn’t even want to postpone my exchange because it would’ve been impossible in terms of organisation. At that point I was just confused and then I missed the deadline for postponing (both laugh). But I was just so certain at that point that I wanted to go – although I had a lot of friends who were supposed to go and chickened out… no, I’m just kidding!

Same, I was the only one who actually left, I don’t know about anyone else. Some of my friends had their exchange cancelled by the host university, though, and I remember how tough that was for them.
I know! I have friends who were supposed to go to the States this spring and got their stay cancelled. They’d been talking about it for two years! I do know two people who went to Scotland as well, though.

However, back to ‘chickening out’ – I suppose if I were to go to a big city during these times, I might have [chickened out], too, so we definitely don’t mean that in an offensive way, right?
Yeah, I think we all had a dilemma, but for us specifically, we then didn’t have to deal with almost any covid at all!
We so got out of it!

Honestly, for me the whole point was to get away from the craziness back home. I think I would’ve gone mad by now just staying in lockdown back in Denmark (interviewer very much agrees).
Yes, I think it created a pleasant division between the lockdown a year ago and now.
And we basically weren’t bothered by corona at all!

Do you have a moment that you would like to re-live?
(Laughs) This is so stupid, but it would be our first trip up Dumyat (our very own campus mountain) when we climbed it the wrong way! But it was so nice – sunny, warm, we were all really being particularly stupid…
This is perfect, you know why? Kwinten said exactly the same thing! (For the interview with my other exchange friend for life, Kwinten, click here.) So it’s comfirmed!
Maybe it’s because I’m wearing the same pants at the moment and they’re all ripped (both laugh hysterically). It was so much fun to explore the local area!

And for those of us who have had to quarantine, it was the best proof that we were ‘free’ again.
We were so optimistic while almost falling down the side of the mountain! 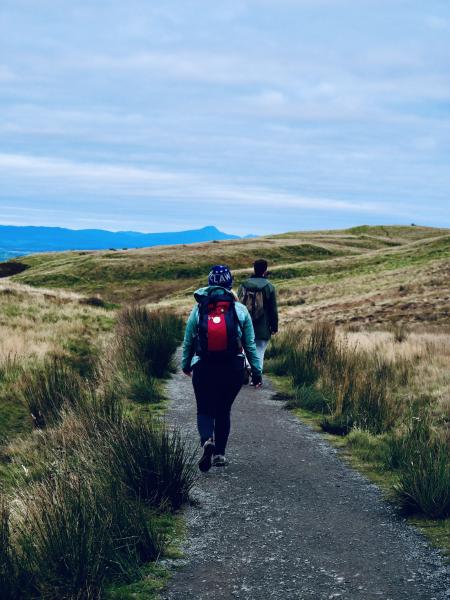 On the way down from the mountain, this time actually taking the path. Sometimes, though, taking the impossible path first is good in that when you then take the usual one, it couldn’t be easier. (Source for all photos in original resolution: https://www.instagram.com/l.kalvoda/)

This concludes the penultimate interview of the series, which we will finish up next week, chatting about getting stranded, realising we had been messaging each other for weeks without knowing we were future flatmates, and why it was all worth it.