Exchange in the Times of Corona: Interview 2, part 2

This week me and Mathilde are finishing up the whole interview series delving into topics such as having to leave your host country overnight and then getting stranded anyway, deliberating who Erasmus during these times is and isn’t for, but also realising just how close one grows to the local area, a few select friends, and, ultimately, one’s own self.

Was there anything that surprised you?
Hmm, the social distancing measures of only being allowed to meet one other household were a bit tough because we were a household of four people only, as opposed to some flats of e.g. ten. That was a bit frustrating, one just have to hope they will get along inside their household. We got along really well in our flat, but the more the merrier, right?
Definitely with the measures!
Yet another thing I was surprised about, though, was how young people were. It’s not that I hadn’t known, but I'd forgotten about it. But then I felt so old, and I’m not old! (laughs)
I know! It’s not until you see your classmates in the undergrad courses that it hits you! Us old continental folk…

Is there anything that you would’ve done differently in retrospect?
Well, lemme see… if I had known they were going to close the borders, I would’ve left on the last weekend before Christmas instead of spending it in an empty dorm! (The conversation gains a slightly hysterical quality as both parties remember their attempts to leave the country after 20 December 2020.)
Oh my god, I think I’ve genuinely pushed that whole experience out of my memory, what a mess that was! (Both of us were involved in the closing-borders-cancelled-flights situation.)

I think I would’ve also come to halls earlier if I’d known I could – I thought it was only for those quarantining, but then I found out about the staggered arrivals strategy. I needn't have booked accommodation downtown. Although all of you [in our flat] had to quarantine, so it wouldn’t have been much of a party anyway at first.
Yeah, that was pretty adventurous as well, with different countries getting red-listed last minute. (Proceeds to tease interviewee about Danish covid zombie minks. Google it, trust me.)

Has the experience changed the way you see Denmark now?
Yes and no… I’d always known we were lucky, but now I was reminded again, and I think I appreciate it so much more. Everything here is just better! Especially talking to people from other countries, I realised that the issues I’d heard about are actually very much present and real.

For sure the way we tried to get back home! I spent the whole day in different airports, getting sent back at midnight, having to get back and set up my room again. I just didn’t care about anything at that point, I remember eating oatmeal at 1 AM and then just crashing!
Oh yes, coming back after we’d cleaned out the flat and thrown everything out and having nothing – because my suitcase got lost at the airport.

I remember how on the afternoon of the day before you went on a walk and I was making us pancakes… and then suddenly, an hour later, we found out about the planned border closing and everything went from 0 to 100.

I’d been so happy on my muddy walk and then…
Which reminds me of something I’d realised – I have really fond and strong memories of just learning about our local area. I’ve experienced some of the nicest moments all myself, in the forests around the campus – so close to home. At first I was a bit sad about not being able to travel in groups, but staying in our area was fantastic!

Absolutely! Our viewpoint at sunset, the daily walks around the loch… sometimes just going out for half an hour turned out to be unforgettable! 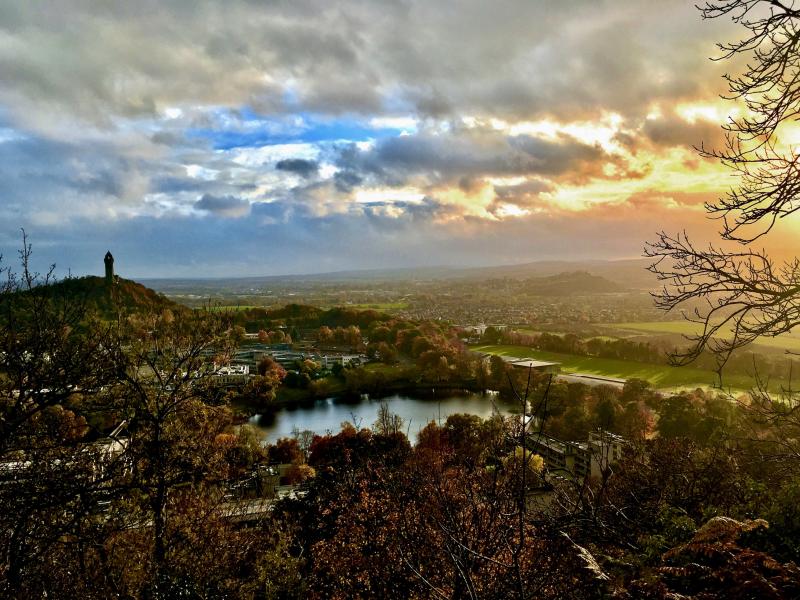 The view from a forest clearing a twenty-minute walk from our literal beds. We dare say that everyday moments like these are not exactly the worst. (Source for all photos in original resolution: https://www.instagram.com/l.kalvoda/)

Yes, and some of my favourite moments were actually by myself, on little daily walks when I hadn’t expected it before, having to cross swans and sheep. I agree totally that the daily banter at our flat was legendary, we hung out so much!

You realise just to what an extent you’d built a whole another life for yourself. And it’s exactly these daily (never mundane in our flat) moments that make up the memories. 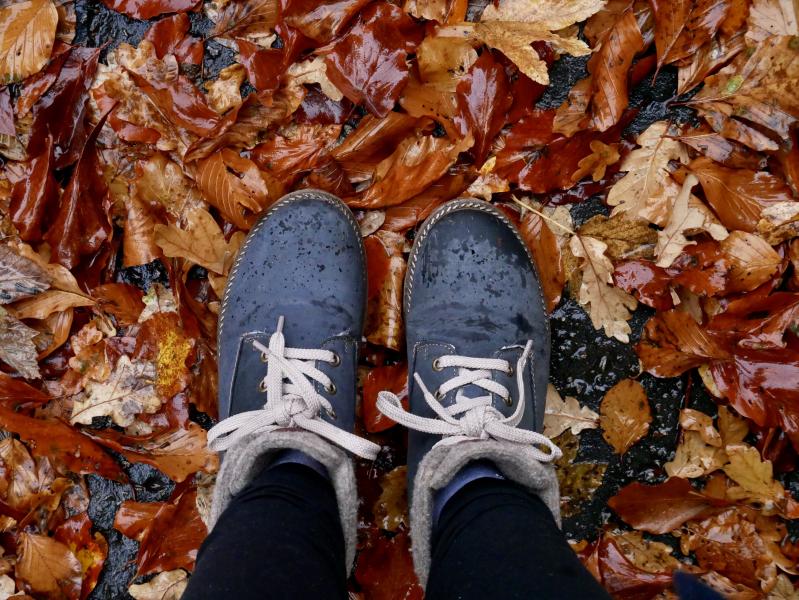 There is nothing Mathilde and I would exchange (pardon the pun) our daily rainy-leafy-windy walks to the local village for. We have both found that the most vibrant colours are sometimes at your fingertips, waiting to be taken in.

We know that many things were difficult because of the situation, but do you think there’s something that we got more out of, as opposed to a non-corona-times exchange?
We had a different kind of flat life – you get to know people a lot deeper. Perhaps if we were all out and about with big groups of people all of the time, we wouldn’t have got to know each other so well. The same applies to the surrounding areas and downtown, which are all wonderful!

Do you remember what was the first thing that you did after arrival?
I was texting you! We’d been texting prior to arrival but we had no idea we were in the same flat!
And then we met in the kitchen and realised. (Both burst out laughing.)

We both decided to stay, even though some of our friends had left (for various personal reasons). What was the moment you decided that staying was worth it?
I felt like I was part of something, being on campus and seeing other students there – as opposed to just taking online classes back home. Also a case of ‘I’ve planned it, I’ve done everything, now I’m here.’ It was also my first time on a campus university and I loved it!

Lastly, what would you say to someone who is deciding, or has decided, to go on exchange during these times?
I think you should realise what type of a person you are and what you want from the exchange. Doing it now might suit some but not all. You also have to feel comfortable being alone. That took time getting used to for me at the beginning, but then I found myself being able to enjoy it!
I’d thought I’d be meeting loads of people, but in the end I can count on the fingers of one hand the people that I have, however, become very good friends with.
That’s a great point! I personally didn’t mind that because I was looking for an escape and a bit of solitude in the nature, but I absolutely see how it might be nerve-wracking for some.
Some people might get lonely faster and even feel isolated, in which case this might not be the ideal case for you. Just remember that you do you, on and off exchange!

And because I feel that any commentary would ruin Mathilde’s final words, I will only thank both of my interviewees for their wonderful insights (and banter), and sign off.