Exchange in the Times of Corona: Interview 1, part 1

In the following weeks our blog section will bring you a ‘2x2’ series of candid interviews regarding anything and everything connected to going on exchange during the times of Covid-19. I have interviewed two very dear friends of mine that I have met on Erasmus in Stirling, Scotland last semester. Aside from the never-ending banter and our sickeningly nostalgic reminiscing, thousands of kilometres apart, we have, over a cup of tea, deliberated issues universal to current Erasmus students. Two interviewees and one interviewer, all with different profiles and paths in life – but also friends for life (cliché much), united by what we have experienced together. 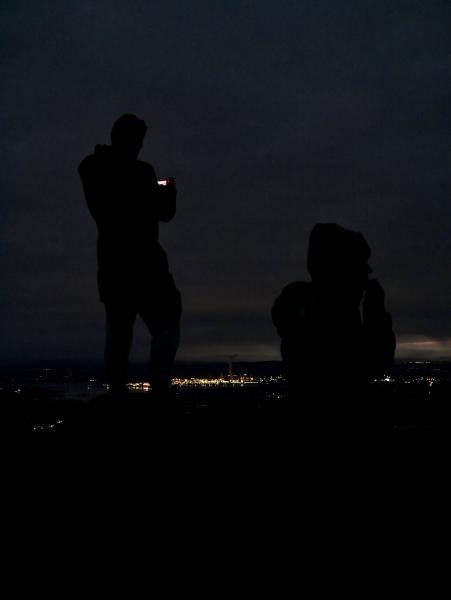 My two lovely interviewees, Kwinten and Mathilde, on top of a mountain overlooking the River Forth Valley at sunrise. (Source for all photos in original resolution: https://www.instagram.com/l.kalvoda/)

Kwinten, my first interviewee, has just graduated a bachelor’s programme in Finance in the North of Belgium. Although he decided to leave Scotland a month into his exchange for various reasons, he has definitely not been left unchanged by the (albeit shorter) experience. Together we have delved into his motivation and the oh-so-long decision process, as well as all the fears, hopes, glory and realisations. Without further ado, here is the first half of our musings!

Do you remember when you decided to go on Erasmus to Scotland? Was it two separate decisions or one?

I’d actually already decided I wanted to go on Erasmus when I started college. A friend of mine had been on a summer programme in Australia, we talked about it and I thought to myself: ‘Hmm, that’s pretty interesting…’ So I was first confronted with the idea at eighteen. But it wasn’t until I was 21, when my sister had gone on Erasmus, too, that I was like ‘Yeah, I wanna do that, too!’ I went to a fair organised by my school and I was intrigued. I couldn’t go then because of other responsibilities, but being at the fair, it felt like ‘This is so me, this is the kind of things I want to do.’

So it was quite a long time then, from feeling the first spark to making the actual decision?
Yes, but the whole time, since my first semester of college, I’d been looking at flyers and acquiring information – but I still had a whole trajectory to go before I could actually apply. By second year I was already absolutely sure! I went to the fair again but I already knew everything (laughs), and I think that was part of why my teachers supported me in going.

Do you think that many people from Belgian colleges/universities go study abroad? Is it generally easy, or is it competitive?
If you’re well motivated, [the teachers] try to do whatever it takes to get you there. In terms of competitiveness, I’d say there is some only when everyone wants to go to the same university. In that case it comes down to grades and motivation, where motivation can for sure go a long way, even if one doesn’t have the best grades.

Ok, that sounds like we went through a similar process, except for that at my home university, there was quite some competition for places – I remember seeing in the app that four people have applied for the two places at Stirling and I was so nervous!

What, you could see that? I couldn’t and I was sooo nervous! (laughs) And we also had to sit for an interview in addition to submitting the documents.

As an Erasmus+ candidate, you would’ve submitted your application around March 2020, when everything was already so unsure because of coronavirus. Did you have any doubts from that point of view?
I remember this so vividly – everything was new, we weren’t sure about anything at all. When corona hit, my brother was actually in Sweden on his Erasmus as well. As for me, I had already submitted everything, and I’ve never had a single doubt about whether I was going to go. I had worked my [bottom] off for it and I was just thinking…

Now it just HAS TO work!
Exactly! My brother came home in March but I figured ‘It’s just March, right? By September I was really positive, I thought the whole 'thing' was just plain silly.’ So I never doubted it – not until when it became clear that most teaching was going to be online. I had always primarily wanted to go in order to discover the educational system and compare it to the one in Belgium. I was really looking forward to experiencing life in Scotland. Still, I never worried about not being able to go at all. I’d worked so hard for it, I was not going to let some *** virus stop me. I really didn’t want it to stop me. Although, we did have to sign a waiver – I didn’t even read it – I just was going to go.
At the beginning of the summer, Belgium was on the UK’s exemption list, but then… you know what happened there (hysterical laughter ensues as both parties of the interview had their countries red-listed last minute before departure).

Your main motivation, as you said, was to explore a different educational system, right?
Yes, and also to work on my English, which is why I chose Scotland in the end. But I have to say that Scotland had been on my bucket list because of the nature as well! The accent, though…

You’ve told me once that you’d never been to Scotland before at that point, which was ultimately one of the reasons why you found self-isolation so harsh after arrival – you had no idea what to expect (except for an image in your head). I can absolutely imagine that, as for me personally it was the very tangible memories of the wonder that Scotland is that got me through it; knowing what absolute beauty awaits me the minute I’m done self-isolating.
Yes, and, to be honest, I simply thought it was all going to be easier. Just like you, I had flatmates from other countries who didn’t have to isolate, so it took quite a few days for us to finally be able to talk. I don’t think that never having been to the country before was the main reason why I struggled, but it was definitely a part of the puzzle. I think I just had really bad luck in the first few days, having some problems with accommodation, groceries… well, I was just frustrated. What also got me was not being able to keep myself busy. I’m usually very active and having to go from a lot of exercise to literal zero was so much harder than I’d thought!

Absolutely, I agree that one can never imagine how much these little things can get to you when you have to self-isolate in a pretty strict regime right after arrival. Oh my, that was hefty, let’s move on – do you have a favourite moment? A moment that you want to re-live again and again?
When we went to Stirling castle together. That and when we got the beer for the first time – at that fancy place with the fancy draft names.
Oh my god it smelt so weird there! (laughter) But I remember that it was raining when we got to the castle, but as soon as we got to the outer walls, it stopped and the sun came out. That was THE moment.
I was absolutely euphoric that I could finally go outside and talk to a person. And then, of course, laundry – I mean, it had been two weeks! 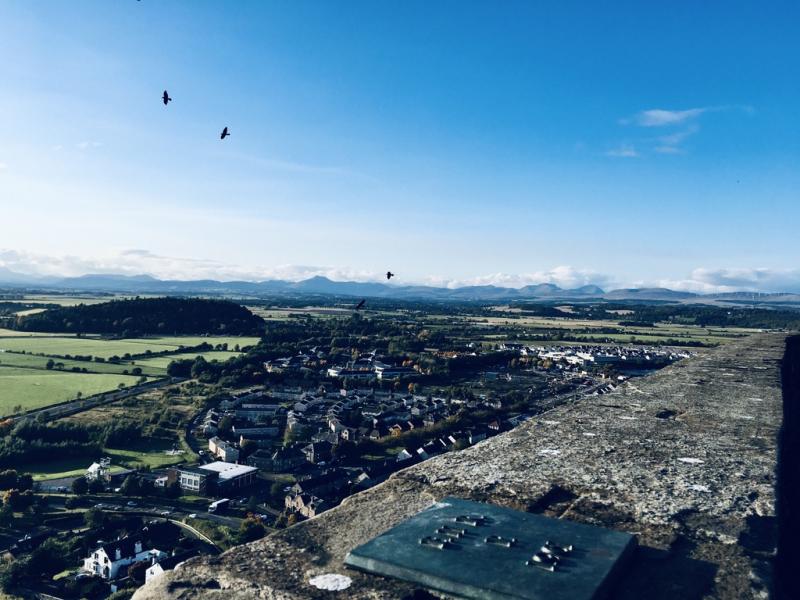 The best part of enduring self-isolation (besides knowing you are doing it for your friends’ health and your own)? Appreciating being outside a hundred times more! (Stirling castle)

And when we climbed Dumyat, too!
Which time, though? The wrong one or the boozy sunrise one?
When we did it the wrong way! (Sidenote: We took an absolutely incorrect detour on our first hike up the local mountain and thought it would be alright to ‘just take a shortcut through the forest’. After going to ridiculous lengths climbing through thorny bushes, we realised we either had to go back through said bushes or climb the actual side of the mountain. The weather was splendid and we are a bunch of ten-year-olds at heart, so you can imagine the faces of the other hikers when we emerged from the shrubbery on the side of the mountain.)
Yes! I remember how warm it was for September and how hyped we were about being able to go outside. Also, the slight edge of trying not to let my backpack overweigh me so that I don’t fall off the mountain! 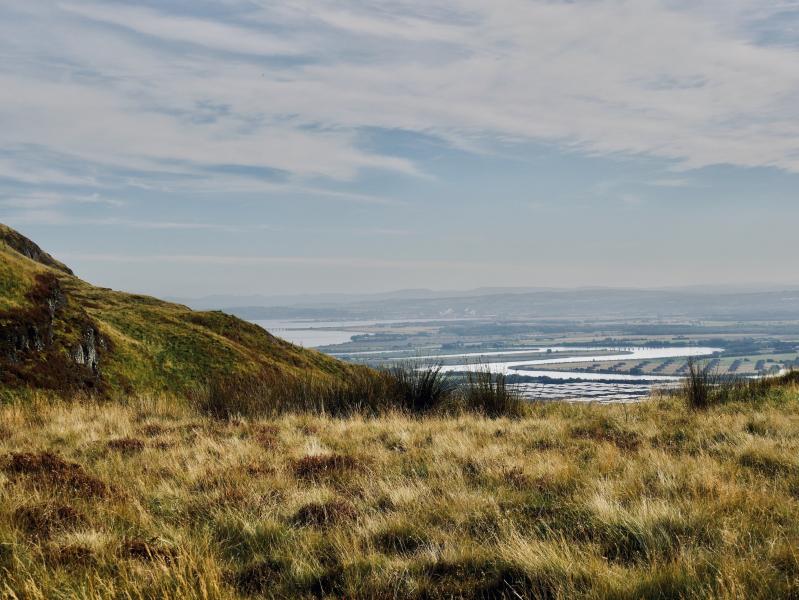 Sometimes climbing the mountain from the wrong side gives you an unexpected view that you wouldn’t have experienced otherwise. Both literally and figuratively.

This concludes the first part of this interview, stay tuned for part two! We will be discussing much more, including a changing view of one’s home country and self, some unexpected benefits of exchange during covid times, as well as advice for fellow exchange students.

On behalf of ESN CU Prague